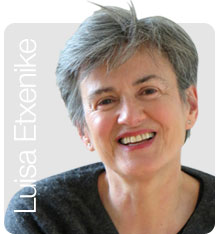 Luisa Etxenike is a highly regarded, award winning author from the Basque Country whose works have been studied and taught by academics and scholars in countries such as Spain, France, the USA, the UK, and Australia. She has a legal background, is fluent in French and English (as well as Spanish), and regularly contributes opinion pieces, essays and reviews to various sectors of the media, including print and radio.

She organises writing workshops, teaches courses on gender studies and narrative theory, and has been a Visiting Scholar at several US universities (University of Columbia and University of Wisconsin in Green Bay). In November 2014, she was one of 4 teams of writers and translators selected to take part in the 2014 OMI Translation Lab 10-day residency at Ledig House, in Ghent, New York.

She has published the following novels:

And the theater plays La herencia (2017), Gernika es ahora, and The Interview (2016), written in collaboration with the physicist Gustavo Ariel Schwartz.

Her short stories have been included in numerous anthologies.

She is the director of the program canaleuropa.eu and of the Literary Festival Un mundo de Escritoras, an International Encounter of Women Writers which has taken place annually in San Sebastian since 1988.

She is a member of the Editorial Board of Grand Place, a magazine dedicated to culture and intellectual ideas.

In 2007 she was awarded the distinction of Chevalier de l’ Ordre des Arts et des Lettres by the French Government.